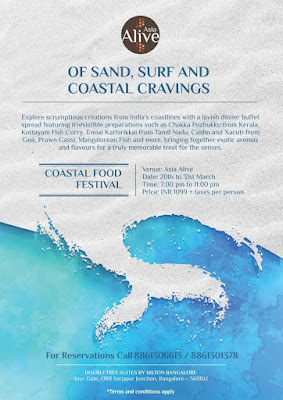 India is a rich country with culture and cuisines. When it comes to regional or traditional cuisines, coastal food plays an important role in describing the centuries old foreign influence. Just like the popular Goan Xacuti was originally from Portuguese cuisine, I always loved the adapted flavors from French, Sri Lankan, Arabian or Portuguese cuisines when I travel to my favorite holiday destinations. A few days ago, I was invited to Asia Alive at DoubleTree Suites by Hilton for their ongoing coastal food festival, ‘Of Sand, Surf and Coastal Cravings’ (20th to 31st March). The main highlight of the coastal food festival is, Arabian Sea region to the Gulf of Kutch is covered and you will get to taste the flavors from different regions from their daily changing menu. 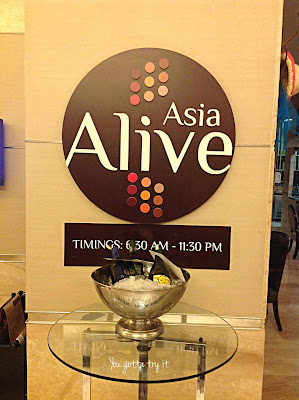 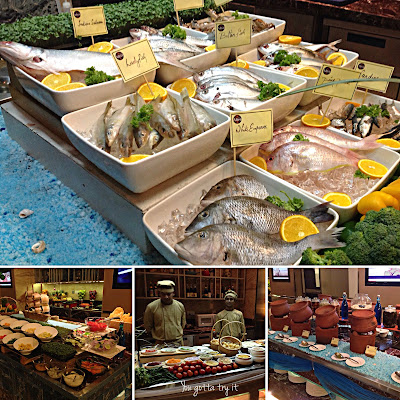 This was my first time at DoubleTree Suites by Hilton which is located at a major IT Hub - ORR Sarjapur Junction. As you walk-in to the restaurant, you will see more of a business class crowd than the regular family crowd. I was invited with few fellow blogger friends and we were greeted with a refreshing spicy Kokum drink sprinkled with coriander leaves. The waitstaff here was wearing lungi to the match the theme and we definitely missed a lungi dance with them. The staffs were extremely polite and helpful. 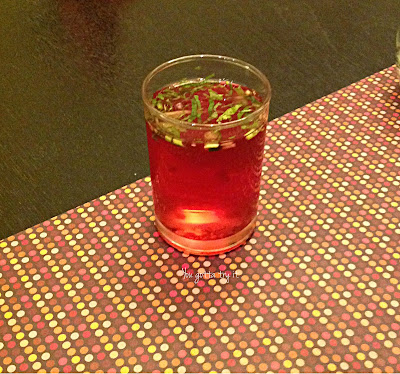 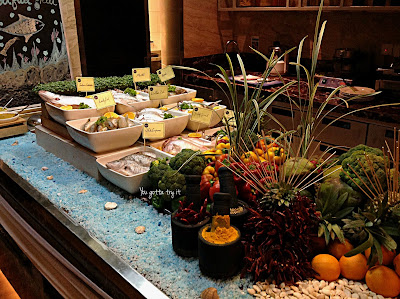 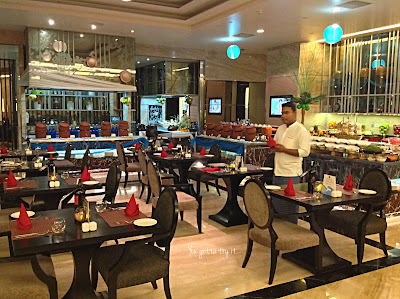 I was surprised to see the grill counter with widespread of fish on display. Soon after we settled for the dinner I tried a bowl of Seafood Saaru (Karnataka region) and instantly fell in love with the well-balanced flavors of prawns, squid and other ingredients from the soup. For vegetarians, there was Elumichai Rasam (Lemon soup from Tamil Nadu). 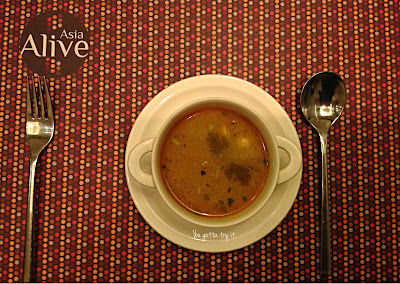 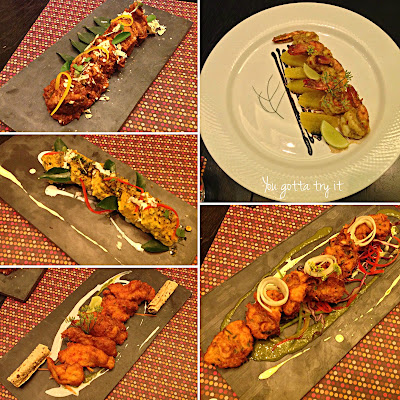 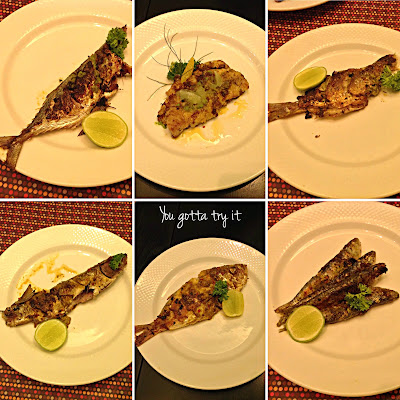 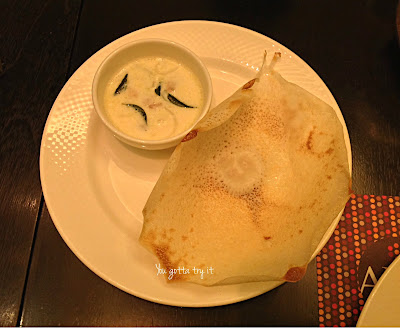 While waiting for the grilled fish we also tried the Appam and stew (veg and chicken) straight from the live Appam counter. I always love to experiment Appam with different combinations; so for the second serving, I preferred Appam with a small portion of Daab Chingri (West Bengal) and Karaikkudi Chicken curry (Tamil Nadu). The combo was heavenly. The Daab Chingri was to die for. 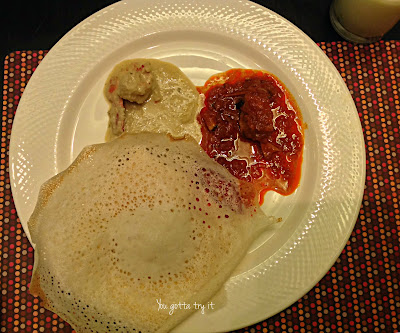 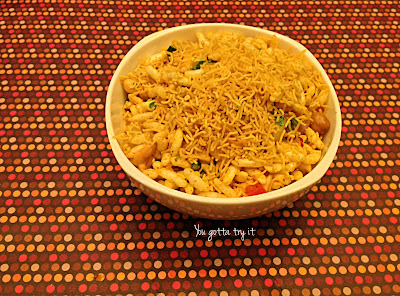 They also have a live chaat counter and the Kolkata special chaat, ‘Jhaal Muri (Puffed rice chaat) was something which we couldn’t resist. My fellow blogger friends who have traveled to Kolkata gave a thumbs-up saying this was nearly the perfect chaat which you get in Kolkata. Before serving main course we had a glass of spicy buttermilk which was refreshingly good for the hot weather. 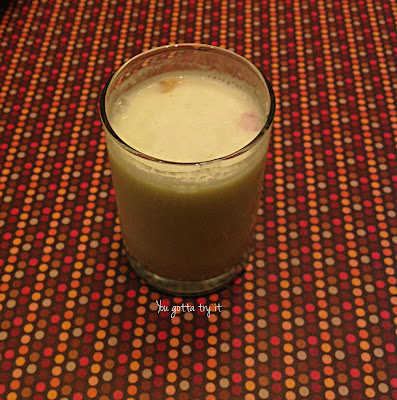 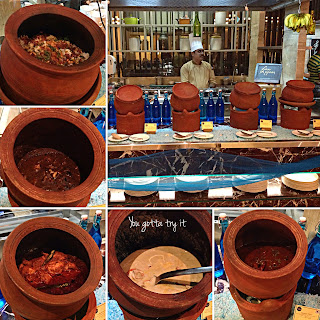 For the main course though there were plenty of options (both in veg and non-veg) I decided to go for Thalassery Chicken Dum biryani (of course with pappad and raitha as accompaniments) and my decision made my day. The other accompaniments available were Chemmeen Chammanthi (Prawns Chutney powder), Tomato Thokku, Pulincurry, and Mammidikaya Pachadi. As Chef Nishant is also from God’s own country he did justice to this Biryani. 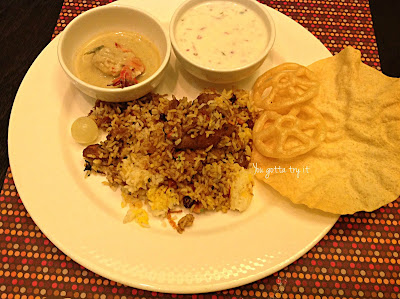 I was longing to have a perfect Thalassery biryani from a long time and without any doubt, I can say this one is the best biryani (Kerala style) I tried in Bangalore. Thalassery is one of the main towns in Kannur district (North Kerala) and the rice they use to make this biryani is Jeerakasala/ Kaima. The matchless flavors from rice, masala, spices, dry fruits and caramelized onions make this biryani very special and different from any other biryani. 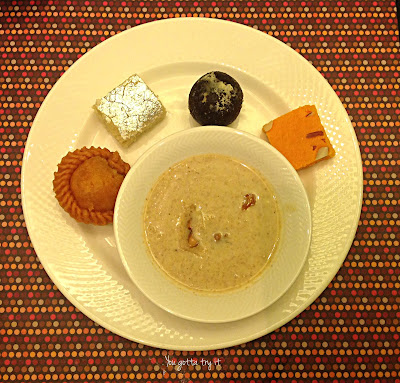 Dessert counter was so inviting with all famous Indian desserts. Like Chef Edward Lee’s quote – “Dessert is like a feel good song and the best ones make you dance”, the desserts I tried from the dinner buffet was Chandrakala, Kala Jamun, Jowlar Payasam, Coconut barfi and Kalakand. Though Kalakand was a bit too sweet for my palate, the other desserts were irresistible. Payasam was surely the winner for me.

Overall I had a great experience at the ongoing coastal food festival at Asia Alive restaurant, DoubleTree Suites by Hilton. The festival is on till 31st March (only buffet dinner) and it’s priced at ₹1099 + taxes (per person).

Address:
Asia Alive by DoubleTree Suites by Hilton
Iblur gate, ORR Sarjapur Junction
Bangalore
For reservations, contact - +91 8861306613 / 8861301378
To know more check out, DoubleTree Suites by Hilton, Bengaluru
Follow me on Facebook - You gotta try it
Zomato- Yougottatryit
Twitter- Soumya_Gopi
Instagram- soumyagopi
For any queries or feedback, call +91-9886771173 or send a mail to afoodiestrail@gmail.com